The June edition of the Messenger is now available here:

Blessings to you from God,
Pastor Gary
Posted by Pastor Gary Taylor at 12:46 PM No comments:

Hello Brothers and Sisters in Christ,

Since I have been at the Minnesota Annual Conference this week I was not able to get this out earlier and since I will be on vacation starting on Monday I there will be a hiatus of this mailing. Below are the readings for the next four Sundays without comment. I trust and pray that you will take some time each week to read the Scriptures in anticipation of what our guest preachers will be speaking about.

Have a great June. I will be back in the office on June 25.

Posted by Pastor Gary Taylor at 12:43 PM No comments:

Hello Everyone, Grace and Peace in Jesus Christ to you,

Since I had a doctor’s appointment on Tuesday and did not get to the office I totally forgot about sending this out.

The destructive power of our earth’s weather systems was on full display on Monday with the destruction of Moore, OK, and the deaths of 24 people including 10 children. Our hearts go out to all families especially those who are mourning those who died. We pray for healing, wholeness, and a rebuilding of lives. We pray that the Holy Spirit will bring comfort, courage, and strength for all in the area.

This Sunday is “Trinity Sunday” and you won’t find the word “Trinity” in the Bible. The strongest evidence in the Bible for the Trinity is the gospel of John as Jesus declares to be one with and in the Father and the Father is with and in Jesus. Together they will send the Holy Spirit who is the presence of Jesus and God in us. Our scripture lessons for this Sunday, with minimal commentary, are:

Romans 5:1-5 – Peace with God through Jesus Christ and God’s love poured into our hearts with Holy Spirit (Trinity).

Have a great week serving God by sharing the love of Jesus through the power of the Holy Spirit.

Posted by Pastor Gary Taylor at 5:07 PM No comments:

A member of one of the churches I serve reflects on her granddaughter's cold reception by a church she visited.

Were You There?
Roselyn Eckel

We entered the church
And nothing was heard,
No sound of music
No saying of a word.

All was so silent
Is some one really here?
I saw forms of people
From the front to the rear.

No one turned to see us
Were we really here?
I looked at my family
To me were so dear.

Yes, they made sounds
Like all children do.
We silently sat down
Some by me, some by who?

No one even turned
Or offered a caring smile.
My goodness we are here
Not further away a mile.

There was some preaching
Some singing too –
But where was the gladness
Given to me from you?

We let the building
We felt empty inside
Although we had sung
“Blest Be the Tie”.

Posted by Pastor Gary Taylor at 2:13 PM No comments:

Hello Sisters and Brothers in Christ,

I received sad news yesterday. One of Peace United’s long time members, Adrian “Tots” Lunceford, passed away at the age of 95. Funeral visitation will be Friday, May 17, at Peace United Church from 4 PM to 7 PM. Services will be on Saturday, May 18, at 11 AM with visitation one hour before. Prayers for Irma, Craig, Ann and their families at this time.

This coming Sunday is Pentecost according to Luke’s account in “The Acts of the Apostles”. Pentecost is a Jewish Holiday celebrated 50 days after Passover and was a celebration of the first spring crops. For Christians it is the day God and Jesus sends the Holy Spirit to the disciples and their lives are forever changed. Matthew and Mark do not have this story and in the Gospel of John Jesus’ resurrection and ascension and the giving of the Holy Spirit happens on the same day. Which version, Luke’s or John’s, is true? Does it matter? What matters is that lives were changed and the Holy Spirit still changes lives. How have you been changed?

Due to the nature of my life this week I will simply list the scriptures to be read. All have to do with the Holy Spirit in some manner.

Genesis 11:1-19 – The tower of Babel. It fits if you think about the languages of this story and compare them to the Acts reading.

Roman 8:14-17 – In the Spirit we are children of God and joint heirs with Christ.

Have a great week in the Spirit of God.

Posted by Pastor Gary Taylor at 9:42 PM No comments:

Sisters and Brothers in Christ,

Grace and Peace be with you in Christ.

Did you know that last Saturday was “Star Wars Day”. It was May 4th as in “May the 4th be with you.” Terrible pun!

Our readings for this coming Sunday are:

Acts 16:16-34 – “The Rest of the Story”, as Paul Harvey used to say, happens in verses 35 to 40, so you may want to read to the end. Paul and his troupe is still in Philippi. Paul casts out a demon in a woman slave who made her masters money by divination. Her owner had Paul and his companion Silas arrested. They were beaten and thrown in jail with shackles on their feet. In the middle of the night, while singing hymns, an earthquake opened the jail doors and shook off the shackles. The jailer, assuming all had escaped, started to commit suicide (before the Romans could execute him) but Paul reassured him that they were all there. With some sharing of the good news, the jailer and his entire family came to believe and were baptized. They stayed up all night. In the “Rest of the Story” Paul pulls his Roman Citizen trump card and the city leaders were beside themselves apologizing. In the midst of adversity, are we willing and able to share the good news with those around us?

Psalm 97 – God depicted as a Majestic, Thundering, and Consuming King in whom all the world and all the world’s righteous people worship. Adversaries are consumed and idolaters are put to shame. The righteous bow before God rejoicing and singing God’s praise.

Revelation 22:12-14, 16-17, 20-21 – OK, once again the lectionary committee seems to have an aversion to some of the difficult verses, especially verse 15. We will come to the skipped verses in a moment. These are the closing words to the book of Revelation. Some of the verses are words of Jesus and some are words of John. In verse 12, Jesus says that we are repaid base on our works. Is that counter to Paul’s assertion that we are saved only by faith? Verse 13 – Jesus is all: A to Z, front to back. Verse 14 says that those who wash their robes (in the blood of the Lamb is inferred) may enter the city and eat from the tree of Life. Verse 15 says that there will be a lot of people left out of the city but in chapters 21 and 22 all peoples, nations, and kings come into the city since all are redeemed. So then who is left out? In verse 16 Jesus restates his connection to God’s chosen King David. Verse 17 seems to counter verse 15 by saying that all who thirst may drink of the water of Life. Again, who is left out. None. Verses 18 and 19 are standard warning about adulterating the book that was found in many ancient writings, especially apocalyptic writings. Verses 20 and 21 testify that Jesus will be coming soon and then closes with and AMEN.

John 17:20-26 – All of chapter 17 is Jesus’ prayer to God and is usually divided into three sections: 1-5 as Jesus prays that he may glorify God (in his crucifixion); 6-19 as Jesus prays for his immediate followers; and 20-26 are prayers for future disciples. His prayer is that we, the spiritual descendants of the first disciples, may be one like Jesus and his Father, God, are one. Jesus’ plea for oneness of his disciples is repeated through verse 23. He also prays that we may be with him to see his glory. His final pray is that the love given God to Jesus may be given to us also. I am looking at this picture on my wall which speaks volumes about how Christianity has not been “One”. 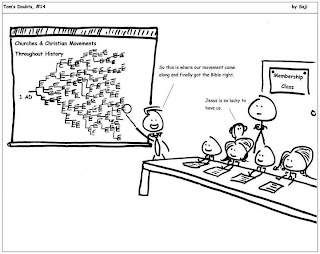 On the logo of the United Church of Christ is the quote “That They May All Be One”.

That was the hope of the UCC at a time when churches were joining together faster then they were splitting apart. Whatever happened to that dream, that prayer of Jesus?

May the Spirit of Christian Unity and Mission fill you will God’s blessings this week.

Sisters and Brothers in Christ,

The latest edition of the Messenger is now available:

Sites of Interest (mine but maybe not yours)