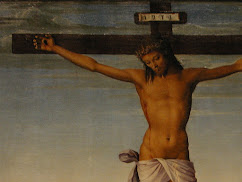 It is a bit strange to call the day in which we commemorate and remember the trial, scourging, crucifixion, death and burial of Jesus “Good”. Many Christians in other parts of the world have a different name for this day. In Germany it is call Karfreitag, meaning “Sorrowful Friday”. Others call it “Holy Friday”, “Great Friday”, or “Black Friday” (which is why we often decorate the sanctuary with black cloth). One website I checked said that “good” is used with an out-of-date meaning of “holy”; for example, “The Good Book” said as a substitute for “Holy Bible”.

The four Gospels – Mark, Matthew, Luke and John – tell a remarkably similar tale of the day when Jesus was crucified. Jesus is arrested in the Garden of Gethsemane on Thursday night. He is questioned/interrogated by the High Priest, King Herod, and the Roman Prefect Pontius Pilate. Pilate sentences Jesus to die by crucifixion and turns him over to the guards. The guards mock and beat Jesus and then force him to carry the means by which he will die. Along the way, when Jesus can no long carry the cross, a stranger is pressed into service. When they get to Golgotha, Jesus is nailed to the cross and crucified between two criminals. Typically, crucified people linger in a tortuous state for many hours. Jesus died relatively quickly. When his death was verified, his body was taken down from the cross and placed in an empty tomb. For the religious and political powers of Jerusalem, that was that; case closed.

The Passion stories “reveal” to us the Sin of Humanity: we are addicted to violence. The life of Jesus showed us another way, a way of reconciliation and healing. All of the miracles, teachings, and parables show us God’s way of love. It is a love that reaches out to the rejected, despised, and marginalized victims of society. A love showing humanity a new way of living within God’s love. Jesus shows and teaches us how to truly love God with heart, mind, soul, and strength and to love, forgive our neighbors (all people) as God loves and forgives us.

Yet, this is not the message the powers of this world – political, religious, economic – wants to hear. Human systems of power are built on winners and losers. Those who control and manipulate everything, and those who suffer the consequences. The rich getting richer and the poor getting poorer. Laws are enacted by the powerful to keep themselves in power and to keep everyone in line. When the system is stressed; when the community becomes fearful or angry; when life as the community knows it seems to be crumbling around them, several solutions become viable.

First, the powers that be clamp down on the unrest. We are see this as China exerts more control over Hong Kong, the military firing on civilians in Myanmar, and on and on.

A second way is to find ways to make peace, fix the problems and restore the balance perhaps by giving some semblance of power to the marginalized and excluded. We saw this happen in South Africa 30 years or so ago. Or when the USSR cut loose its former bloc as it was crumbling in the 1980’s

If solutions aren’t found then the potential of having an all out civil war, or a war of all against all, can destroy a community.

An ancient way of bring peace to the community is the way of the scapegoat. Leviticus 16 has an actually ritual of the goat that bears the sins of Israel. The scapegoating ritual, with humans instead of goats, has been theorized (Rene Girard and others) as the foundation of all ancient religions and the mechanism of scapegoating lives on in our societies. Here my description of what happens:

*In the Gospel of John, the High Priest Caiaphas says to some Pharisees, scribes, and other priests, “You do not understand that it is better for you to have one man die for the people than to have the whole nation destroyed.”

The story of God’s work through the Old and New Testament is the revelation of this system that is not God’s way. The Judeo-Christian story is a revelation of humanity’s sin of violence against the innocent. In the Book of Job, in at least a third of the Psalms, in the words of the prophets, the victim is loved by God. There should be no more victims. The story of the Passion of Jesus Christ, the Son of God and an innocent man, is Jesus entering into our system of death to reveal and redeem it. Good Friday is the day we remember what God has done for us. The story of the Resurrection (Easter) is God’s declaration to us that death does not have the final say. God is a God of Life, Grace, Forgiveness, Redemption, and, most of all, Love.

Sites of Interest (mine but maybe not yours)